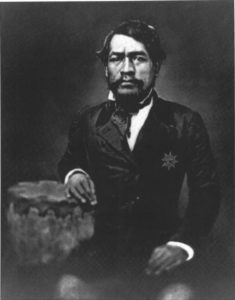 On the 17th of March, 1814, on the sunny, windswept shores of Keauhou Bay on the west side of Hawaii’s Big Island, a child was delivered stillborn by the Queen Keopuolani, the highest-ranking wife of King Kamehameha the Great. As the second son of the royal couple, this child had been promised to the king’s advisor Kuakini for adoption, but he refused to take guardianship of the stillborn baby. But the Chief Kaikio’ewa believed there was hope for the child, and he summoned the priest Kapihe to the birthsite. Under Kapihe’s guidance, the child was cleansed, laid on a stone by the water’s edge, fanned, sprinkled with water and prayed over until he took his first breath and began to cry. Thus was born Kauikeaouli, later to be known as Kamehameha III, one of the most important leaders in the modern history of the Hawaiian Islands. The stone upon which he was brought into the world still stands today as a protected monument at Keauhou Bay, and it is here that Kamehameha Schools will host the 19th Annual Tribute to Kamehameha III and Birthday Celebration on March 15th and 16th, 2019. The two-day festival is meant to honor the memory and legacy of the King and features a tribute by the Daughters of Hawai’i, the Royal Order of Kamehameha, and Kamehameha Schools, a lecture on the theme of “He aupuni palapala ko‘u – Mine is a Kingdom of Literacy” with speaker Kalehua Krug, an evening of music featuring local artists and a crafts fair on the grounds of the Sheraton Kona Resort & Spa at Keauhou Bay. You can view a full listing of details for this donation-based event here. 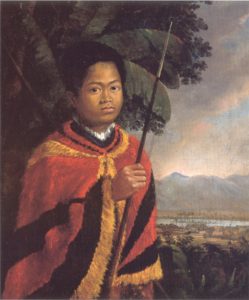 birth? Kauikeaouli came to power at a tumultuous time in Hawaiian history, and quite unexpectedly after the untimely death of his elder brother Liholiho, Kamehameha II. Despite the challenges faced by the 11-year-old king and an early period of rebellion against the establishment, he grew to become an adept leader and a skilled politician. He led the Hawaiian people through a period of increased and occasionally hostile contact with international powers, and although some of his actions have become controversial in retrospect, most people today acknowledge that he was acting in what he believed to be the best interest of his Kingdom and citizens at the time. Here are just a few of his notable achievements:

Despite the odds stacked against him, Kamehameha III was equal to the challenges he faced in guiding the rapid transformation of the stone-age Hawaiian society into a modern, international player in the global political and economic arena. He did so with compassion and the interests of his people in mind first and foremost. For this he is remembered and honored each year in the Annual Tribute to Kamehameha III, and will be for generations to come.