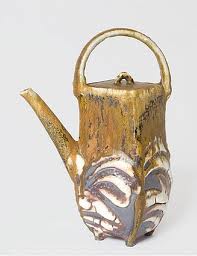 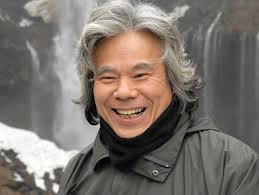 Born in Tokyo in 1950, Ken Matsuzki was influenced by his father’s art collection and became passionate about ceramics at an early age. Ken started throwing on a wheel in his high school art class. As a senior in high school, he had the opportunity to switch his science classes to art and then able to spend all day in the art room working with charcoal or pencil drawing and drafting.
He entered the Fine Arts Ceramic Department at Tamagawa University in 1972 and decided to make a living with his hands. He would complete his assignments quickly so he could head to the wheel to see how many yunomi tea cups he could throw in an hour, normally about twenty.
Midway through college, Ken Matuzuki took control of his future and arranged to study under Master potter Tatsuzo Shimaoka. He was known as “magician of table wares”, famous for his food ceramics. Matsuzuki became his assistant in 1972 and began an extensive apprenticeship. From Shimaoka-sensei, Matuzaki learned philosophy, the necessary mental attitude when making art and how to think about ceramics.
After 15 years as an independent artist, Matsuzki decided to shift his way in creating ceramics. His inspiration was the Oribe wares of Japan’s Momoyma period (1568-1615) and he incorporated the approach and style of the warrior Furuta Oribe (1545–1615) into his ceramics. He built an anagama (wood-firing kiln) with two firing mouths. While exploring natural raw clays with strong fire-resistance and great personality, he kneaded his own personality into the clay as well. The quality of his pieces depends 60% on the choice of clay, the other 40% determined by the firing and the form.
To be a Japanese potter, one generally spends three years kneading clay and ten years training on the wheel; great emphasis is placed upon technique. Ken Matsuzaki spent twenty years throwing on the wheel, but left it to hand-build, one-by-one, the forms he had in his heart. Thirty years after becoming a professional, Ken Matuzuki has built a new type of anagama, one enabling him to express a unique form of beauty in his materials through use of flame.
As Ken Matsuzaki writes: “Even though at this point in history, science has made it possible to fire anything, science alone does not enable us to express the beauty of the natural materials. Without the reflection of the maker’s heart, a work will be unable to move anyone. I believe that to make things is to express the heart.”
Ken Matsuzaki Video –
Afterwards, Ken Matsuzaki will hold an Intermediate – Advanced level three-day workshop at Donkey Mill Art Center in the Holualoa Village.
Date: June 21 – June 23, 2013
Back to Blog