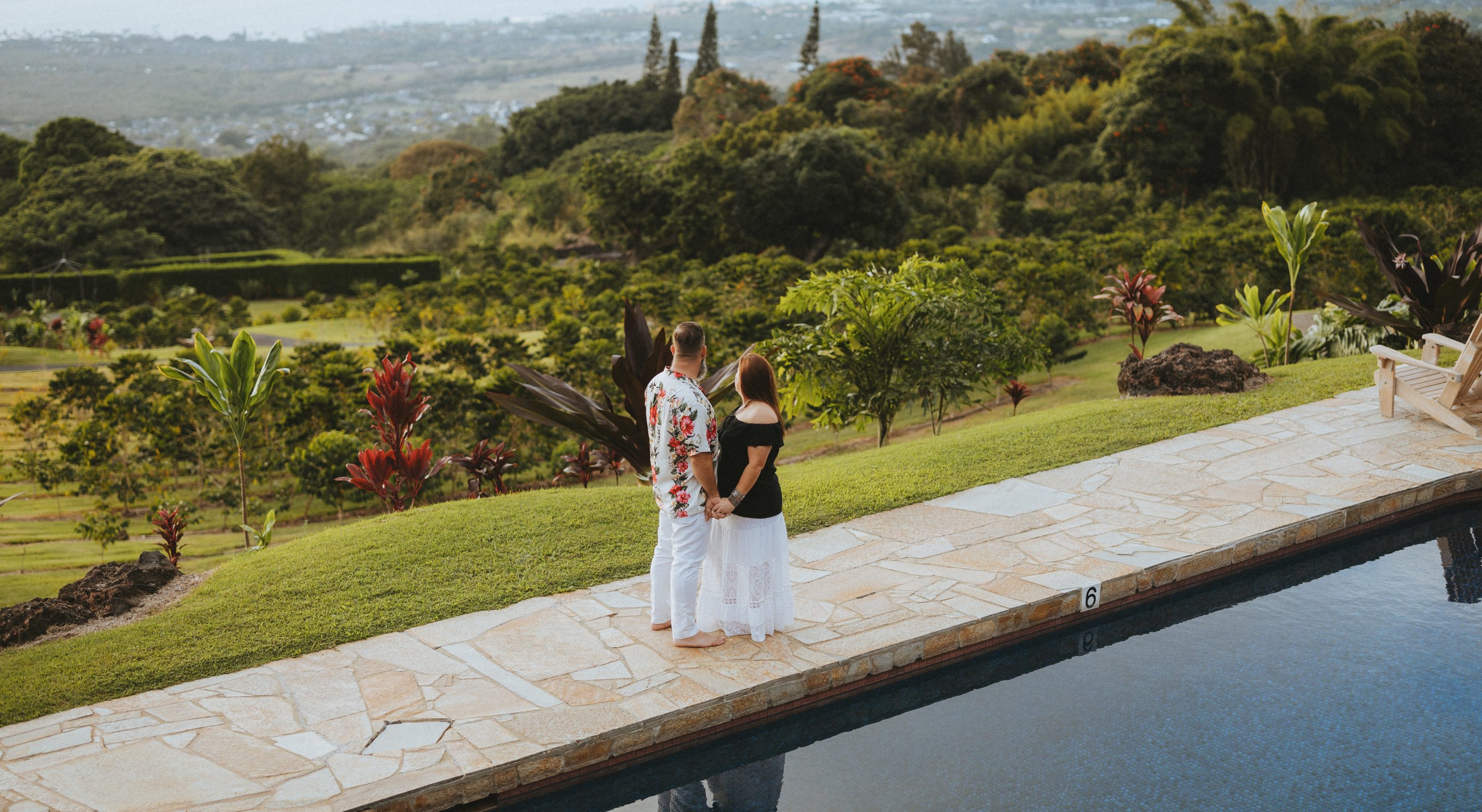 For many, a visit to Hawaii and a stay at the Holualoa Inn is like a beautiful dream. For Carrie Adams and Dave Young, it was more than that- it was destiny.

In March 2020, Carrie decided it was finally time to slowly venture into the terrifying world of online dating. A single mother of twin toddlers, she was apprehensive. “I was flat-out scared to date,” says Carrie. Then, she found Dave.

“I saw Dave’s online profile, and he had full custody of his two daughters, and I could just tell–this man has the same story I have.”

Drawn to his kindness and integrity, Carrie knew early on that Dave was different. “I could already tell he was trustworthy in a way no one else in my life had ever been,” she shares.

The two messaged back and forth for months, virtually getting to know each other and learning about their similar, at times messy, pasts. During that time, the subject of Hawaii was first broached. Dave had visited years earlier and been captivated by the mysterious allure of the islands. He wanted to return, this time with Carrie to share it with.

Two weeks before they would meet face-to-face, Carrie, not usually an artist, felt compelled to sketch a Hawaiian scene. Never having been, but inspired by her feelings for Dave, she drew a view from a Hawaiian hotel lanai (balcony) with a pineapple on a little table in front of the railing, the sun setting behind among crashing waves. She wrote the words “Welcome to peace, love, understanding, joy, fun, adventure, new things and providence.” In Hawaii, this can be encapsulated by the word “aloha.”

“I drew that picture as a prediction of my future with Dave, already thinking of a Hawaiian honeymoon with a man I had not yet met in person,” says Carrie, surprised at her own audacity. She stashed the premonition, in a ceramic pineapple-shaped container she had, then set it out of her mind.

The couple met in person two weeks later and continued their romance cautiously, building trust while also slowly blending their families. A short time after meeting in person, Dave revealed to Carrie he already knew he wanted to marry her someday.

“Does that freak you out?” he asked. “Bizarrely, no it doesn’t,” she responded.

In February of 2021, already dreaming of their future together, Carrie was googling Hawaiian honeymoon destinations. In what would prove to be a serendipitous trail of algorithms, she happened upon the Holualoa Inn Bed and Breakfast.

“It was everything we had talked about–distinctly Hawaiian, beautiful, intimate, and obviously imbued with so many personal touches,” recalls Carrie. “When I called to find out about how to pronounce it, Kat [in reservations] was so much fun to talk to. I hung up the phone feeling like I’d made a friend.”

In March of 2022, two years after they first started talking online, Carrie and Dave made their engagement official. Hawaii continued to endure as a theme for their relationship. The couple held their official wedding in September but had a private and secret legal ceremony in April both near their home in South Carolina. They exchanged Hawaiian-inspired rings and, without planning it, both wore Hawaiian print for their wedding attire.

With their vows made, the couple got to start planning their dream honeymoon. For Carrie and Dave, the Holualoa Inn was the embodiment of that dream.

“Throughout our dating life, we have messaged each other every night before going to sleep. Often, we send each other Holualoa Inn Instagram pictures. It’s kind of silly, as we’re both going to see them on our own accounts, but it has become a tradition,” says Carrie.

But for self-employed parents with four young kids, already on a tight budget and in the process of combining households, their dream honeymoon seemed out of reach. The couple felt pressure to settle for a more economical honeymoon, something closer to home.

That’s when Carrie’s mother swooped in to help make their dream come true, reserving the Darrell Hill Cottage for a week in December as a wedding present.

“Our stay was literally a dream come true,” says Carrie, noting the incredible resemblance of the Darrell Hill Cottage lanai to the sketch she had made. “The gorgeous surroundings, the peaceful quiet, the absolute serenity of the main building- all of these things make the magic in the first place,” shares Carrie, but she and Dave also were treated to a little extra magic.

Dave awoke before dawn one morning and happened to see a huge shooting star. The couple went out to the cottage lanai and were treated to the majesty of the Geminids meteor shower, which peaks in mid-December. As they watched the meteors fall, from the lanai Carrie had envisioned years before, they made wishes for the future.

Not long after her mother reserved the Darrell Hill Cottage, Carrie happened across the prophetic drawing which she hadn’t set eyes on since putting it in the ceramic pineapple. She shared the contents with Dave, reveling in the prediction that had come to pass.

Carrie now lovingly refers to the ceramic pineapple as “the magic pineapple” and keeps it on her bedside table.

“It now holds a description of our dream house, just in case it really is magic,” she says.