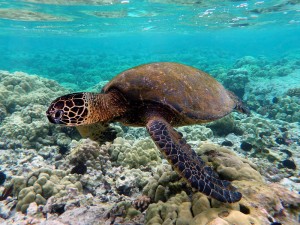 In Hawai‘i, the green sea turtle is known as the honu. And here in West Hawai‘i, honu are prevalent at beaches, bays and shorelines across the Kona coast.

Weighing up to 300 pounds with a life expectancy of 80 years, the honu frequents shallow waters and coral reefs where it feeds on algae. Like a telescope on a submarine, the honu will often pop its head out of the water as it floats around, making magical appearances for visitors on the beach to enjoy. Honu are also known to crawl out of the water and sleep on the sand, sometimes blending with the rocks along the shore. 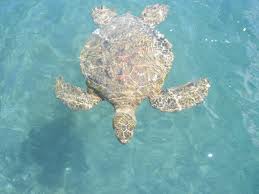 Honu are protected by law, so it is illegal to touch or harass a green sea turtle, whether it is in the water or on the beach. There are many places in Kona to see honu up close. Kahalu‘u Beach Park on Ali‘i Drive offers a great spot to snorkel or swim among the turtles. Farther south near Kealakekua Bay, green sea turtles are prolific at Ke‘ei Beach and at Pu‘uhonua O Honaunau National Historical Park.

Our Holualoa Inn ohana can steer you in the right direction for snorkel adventures and turtle-sighting safaris in Kona. When you stay at our Kona boutique hotel bed and breakfast inn, you will be just a few short minutes from some of the best turtle-viewing beaches in the area.