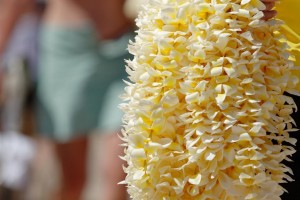 King Kamehameha Day is celebrated throughout the state of Hawaii on Friday, June 11. This festive day of commemoration is especially meaningful on the Big island, birthplace of King Kamehameha I aka King Kamehameha the Great! His grandson, King Kamehameha V proclaimed the June 11 holiday in 1871 and it was one of the first holidays to be established when Hawaii became a state in 1959. June 11, 2010 marks the 94th annual event to honor the man who united the Hawaiian Islands, formally establishing the Kingdom of Hawaii in 1810. Some say his actions in unifying the islands prevented their take over by any number of world powers at the start of the 19th century. Today, King Kamehameha Day is celebrated with a variety of events that are a tribute to ancient Hawaii and the cultural traditions that King Kamehameha I defended when his society was slowly shifting towards European ways. Kamehameha was born in Kohala on the northernmost tip of the Big Island circa 1758 and this tiny but proud community boasts, “small town, big celebration” and this year will be no different! North Kohala festivities begin at the King’s statue at 8 a.m. for a traditional hawaiian blessing, chant and hula followed by the draping of the stature with a 22-foot long floral lei. A parade follows at 9 a.m. and is followed by a Ho’olaule’a featuring day long cultural displays, crafts fair, food and beverage booths and fabulous entertainment. Holualoa Inn guests will want an early wake up call to make it to North Kohala by 8 a.m. — allow at least 90 minutes to make a leisurely drive from the Inn to Kohala town. Closer to home (just 10-minutes from Holualoa Inn), a floral parade honoring King Kamehameha takes place through the heart of Kailua-Kona village beginning at 9 a.m. Friday, June 11. Entertainment, crafts and food booths will be on offer following this colorful — and fragrant —  parade.
Innkeeper Holualoa Inn