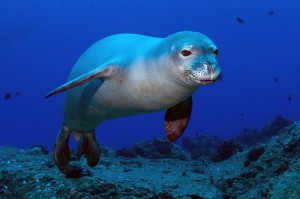 Visitors at Pu‘uhonua O Honaunau National Historical Park are experiencing a rare treat this week with the arrival of a wild Hawaiian monk seal that has been swimming in the bay and sleeping on the sandy beach fronting the Royal Canoe Landing.

The only species of seal that is native to Hawai‘i, the Hawaiian monk seal is among the most endangered marine mammals on the planet—with fewer than 1,100 seals total frequenting Hawaiian waters. Most of the monk seal population is concentrated in the Northwestern Hawaiian Islands, but there are a handful of seals that live near the eight primary islands, including right here on the Big Island. Hawaiian monk seals are protected under the Endangered Species Act, the Marine Mammal Protection Act and under state law in Hawai‘i.  It is illegal to approach, touch or harass a monk seal, whether it is in the water or on land.

The visiting monk seal at Pu‘uhonua O Honaunau doesn’t seem to mind folks watching it as it sleeps on the beach. The area is cordoned off by yellow tape that keeps visitors a safe distance from the mammal. If ever you spot a Hawaiian monk seal on a beach or in the ocean, be sure to contact NOAA Fisheries Service so that they can keep tabs on these highly endangered creatures.

Did you know that the Hawaiian monk seal is Hawai‘i’s official state mammal? And here’s another interesting fact: In Hawaiian, the monk is known as llioholoikauaua, which means “dog running the rough seas.” It’s also sometimes called “na mea hulu,” which means “the furry one.”