Each December in Hawaii, the headline “The Whales are Here!” rapidly spreads across the internet, through blogs, onto the front pages of our newspapers, and into local talk story. The beginning of whale season eclipses the other spectacular events that occur around the same time, such as the first snows on the Big Island’s Mauna Kea volcano or the opening of big wave surfing on the north shores of Oahu and Maui. The arrival of thousands of migratory Humpback Whales is met each year with renewed enthusiasm from locals and visitors alike. Truth be told, it is awe-inspiring to watch as massive 40-ton whales launch themselves out of the water, or to hear their haunting far-off calls which echo our own announcements. From the ocean-facing patios here at the Holualoa Inn we are treated to the sight of the humpbacks’ acrobatics as they swim below us, just beyond the pristine reefs of the Kona Coast.

The Humpbacks are among the best-studied, most well-recognized whale species in the world. After an ambitious conservation effort in the latter half of the 20th century, the population of North Pacific Humpbacks (the group that migrate to Hawaii) has grown to an estimated 20,000 individuals, and in 2008 the International Union for the Conservation of Nature (hereafter IUCN) upgraded their status from Vulnerable to Least Concern. Thanks to widespread public attention and concern for these whales, it is very likely that their populations will remain strong worldwide for the time being. And thanks to the ubiquity of blogs online and tours here in the islands, many people are already familiar with their biology and activities. Therefore, rather than writing further about this widely-known species, we would like to dedicate this post and the upcoming whale-watching season to a few of the much more mysterious whale and dolphin species which make Hawaii their home year-round.

The waters off the Hawaiian Islands are shared by at least 18 species of Odontocetes (whales with teeth) and seven species of Mysticetes (baleen whales, or filter feeders, like the Humpback). Because the seafloor on the west side of the Big Island of Hawaii abruptly drops off to a depth of -18,000 feet, even species which prefer deeper waters can be sighted close to shore.

After humpback whales, Short-Finned Pilot Whales (Globicephala macrorhynchus) are the cetaceans you are most likely to spot during a whale-watching trip. It is estimated that around 9,000 Short-Finned Pilot Whales live in Hawaiian waters. Testing of this population indicates that they are genetically isolated from other populations in the Pacific, which suggests that they are full-time residents around our islands.

Short-Finned Pilot Whales are actually among the larger members of the dolphin family. They are distinguished by their large, bulbous foreheads and their dorsal fins, which are wide at the base and occur towards the front of the whales’ bodies. Adult males average 18 feet in length while females usually measure around 12 feet. Their weight can range from about 2200 pounds to 6600 pounds. They are social creatures who live in groups of 25-50 members. Short-Finned Pilot whales hunt after dark, when they make dives in excess of 1,000 feet for squid and octopus. They spend the daylight hours resting near the surface, where you may encounter them during a whale watching tour.

Cuvier’s Beaked Whales (Ziphius cavirostris) are one of the less frequently encountered cetaceans in Hawaiian waters, but they are worthy of mentioning for their unique and strange characteristics. Cuvier’s are the deepest and longest diving mammals in the world; they can make dives to nearly 10,000 feet below the surface, for periods in excess of two hours, in order to hunt for several different species of squid. Because they spend long periods on time in deep water, they are the subject of frequent attacks by parasitic Cookie Cutter Sharks, which leave small (2 inch) wounds where they bite their victims. Adult Cuvier’s Beaked Whales bear dozens of scars along their bodies from these attacks. Males generally have additional scarring that is the result of fighting with other males.

Adult Cuvier’s Beaked Whales can reach lengths of 24 feet and weigh up to 5500 pounds. There is little size difference between males and females. They can be distinguished by their small dorsal fins, which are located two-thirds’ of their body length behind their heads, and white spotting along their backs which is more noticeable in males. Males also have teeth which erupt from the tip of the lower jaw. In the warm, tropical waters of Hawaii, these exposed teeth are usually covered by barnacles.

Pygmy Killer Whales (Feresa attenuata) are the least-frequently encountered species of dolphin in the world. The first human encounter 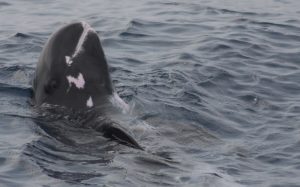 with live members of this species was not recorded until 1954. So little is known about their worldwide population that the IUCN has listed them as “Data Deficient,” meaning there is not enough information available to determine whether or not they are endangered.

False Killer Whales (Pseudorca crassidens), like true Killer Whales, are also members of the dolphin family. Adult males can grow up to 20 feet long and weigh over 1,500 pounds, while the slightly smaller females will reach lengths of up to 15 feet. Pseudorca live in groups of around 20 members and hunt cooperatively for pelagic game fish such as Tuna and Ono, and display an unusual sharing behavior in which a caught fish will be passed to every member of the group before it is consumed. They are long-lived, to over 60 years, and females go through menopause (which occurs in less than 1% of animal species). They continue to play an active role in their groups after reproductive age, helping to care for the young and passing important accumulated knowledge. 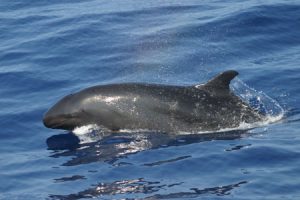 There are three populations of Pseudorca in Hawaii; one that resides primarily offshore in waters deeper than 3,000 feet, one that lives around the uninhabited Northwest Hawaiian Islands, and one that resides near the Main Islands (from Kauai to the Big Island). The latter population stays near the islands year-round and is genetically unique from its neighbors. Hawaii’s Pseudorca are the best studied in the world, but this does not mean they are common. Pseudorca are at the top of the food chain, and like other apex predators they are naturally rare and widely dispersed. The population has also experienced a steep decline: it is estimated that the island-associated population is around 150 individuals, a 66% decrease from just twenty years ago. This drop is likely due to several factors, including an increase in chemical pollutants in Pseudorca’s environment which are believed to weaken their immune systems, competition with humans for prey, and long birth intervals (one calf every 6-7 years). In 2012, Pseudorca was listed as Endangered under the U.S. Endangered Species Act, and actions are being undertaken locally to reduce human impact on their population. If you do happen to see one during your stay, consider yourself lucky to have encountered one of the ocean’s most unique and elusive mammals.

Orcas (Orcinus orca), or killer whales, are extremely rare in Hawaiian waters. A 2002 survey of the offshore waters of all the islands 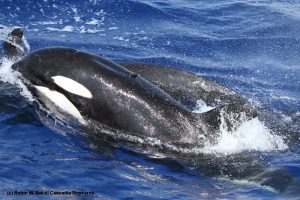 encountered only 2 individuals. However, in 2016 a distinct individual was re-sighted over a span of more than one week (once in July and again in October). This has led researchers to suggest that while Orcas do not reside around the islands, they may return here after extended trips around the Pacific.

While it is true that you would have to be extremely lucky to sight any of these cetaceans (except the Short-Finned Pilot Whales) by chance, we believe it is important to bring attention to Hawaii’s “other whales.” Our resident whales are an important part of our islands’ marine ecosystem. And while a whaling ban was sufficient to help restore the population of Humpbacks in the Pacific, the whales mentioned here are still threatened by factors ranging from long-line fishing to chemical pollutants. Global climate change may also prove to have far-reaching impacts that affect their health and behavior. It is up to us to make choices which will protect our marine ecosystems. If you decide to take a whale watching tour during your stay at the Holualoa Inn, be sure to do your research and choose a company that implements ocean-conscious practices and provides an educational experience. Happy sailing!