Did you know that there are three royal palaces in the United States? In fact, all three palaces are located in the state of Hawaii: two of them on Oahu (Iolani Palace and Queen Emma Summer Palace), and one of them right here in Kona. 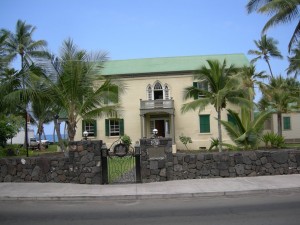 Situated on the oceanfront in Kailua-Kona, Hulihe‘e Palace was built by the second governor of the Hawaiian Islands, John Adams Kuakini, in 1838. The palace served as his principal residence until he passed away in 1844, and eventually became the summer home of Hawaiian royalty including King David Kalakaua and Queen Kapiolani. During his travels abroad, Kalakaua decided the palace should look more like the royal palaces he had seen in Europe. In 1885, the lava-rock exterior was stuccoed and the interior plastered, while ornate elements were added throughout, including 24-karat gold-leaf picture mouldings, crystal chandeliers, decorative ceilings and other touches fit for a king. 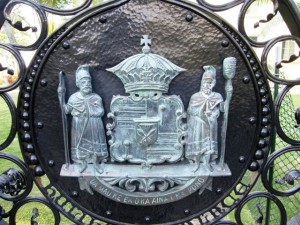 In 1925, Hulihe‘e Palace was slated to be razed to make way for a hotel. It was rescued by the Daughters of Hawaii, a volunteer organization that continues the care-taking of the palace to this day. Now a museum, the palace showcases furnishings and artifacts of the era including Kalakaua’s koa armoire, which was awarded the silver medal in 1889 at the International Exhibition in Paris.

Open to the public for daily tours, the palace also hosts a monthly Sunday concert held on the south lawn. This Sunday, May 15 at 4:30 p.m., a free Hawaiian Music Concert features the Merrie Monarchs men’s glee club, with hula performances by Etua Lopez’s halau.

And speaking of the royal treatment, your Holualoa Inn ohana stands ready to help make your romantic Hawaiian vacation one to remember. During your stay at Holualoa Inn, be sure to include a visit to Hulihe‘e Palace as part of your itinerary.