Visitors on the Big Island are in for a treat, as a new lava flow has just broken out of Kilauea Volcano at the Pu‘u ‘O‘o Crater. Contained entirely within Hawaii Volcanoes National Park, the flow is located less than a half mile from the Kamoamoa fissure that erupted in dramatic fashion this last March.

Oozing down the east rift zone, the latest lava breakout has been putting on a spectacular show, flooding areas downslope with fiery, molten lava. After the initial breakout, Pu‘u ‘O‘o Crater then collapsed almost 280 feet, according to scientists at Hawaiian Volcano Observatory.

In March, the crater had collapsed in similar fashion prior to a four-day fissure eruption, and within a month, lava was refilling the crater. Then just last week, lava began to spill out of two small pits just west of the crater. On August 3, lava burst from the west flank of the cone, pouring down the slope and forming a branched flow.

Scientist say that based on similar events through the years, the flow could last anywhere from weeks to months. “The volume of the erupted lava has already equaled, or exceeded, the volume of the Pu‘u ‘O‘o crater collapse, so the flow is possibly being fed directly from the rift zone,” according to the weekly “Volcano Watch” by Hawaiian Volcano Observatory.

Visitors may view the glow from several vantage points in the park, including the Pu‘u Huluhulu overlook, which is a short 1.3 mile hike off of Chain of Craters Road. The trail is clearly marked with reflectors to guide the way. Up-to-the-minute details are posted at HVO’s Kilauea Status page. Updated information about lava viewing can be found on the park’s website. 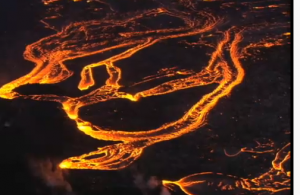 The staff at Holualoa Inn can give you insider tips on how to get to Hawaii Volcanoes National Park, and what to take with you for your lava-viewing adventure. Our tropical Hawaiian bed and breakfast provides a splendid retreat just above Kailua-Kona in the heart of Holualoa.