One of the best things about the Big Island of Hawaii is that even though it is becoming an increasingly popular destination for visitors from around the world, it still has plenty of places to get away and opportunities for discovery and adventure. The island is rich in history, culture and natural beauty, but many visitors (and even many locals) only ever brush the surface without discovering some amazing attractions that are off the beaten on the Big Island of Hawaii.

This series is about some of the best and least-visited spots on the Big Island. Some are hidden right under the noses of people who pass them by every day, some are waysides en route to more popular destinations, and some are truly off the beaten path, but a visit to any of them can be an unexpected highlight to your Big Island getaway. 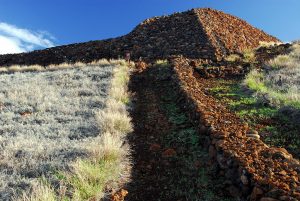 By Bamse  GFDL or CC, via Wikimedia Commons

On the makai (ocean) side of the intersection of Highway 19 and Highway 270 sits one of the most significant historic sites in the Hawaiian Islands. Endless streams of commuters pass it by each day without giving it a second thought, and many tourists end up doing the same because of its nondescript appearance and lack of signage. The site, called Pu’ukohola Heiau, is one of the last Hawaiian temples constructed before the arrival of Christian missionaries and the place at which Kamehameha the Great began the consolidation of power which would lead to his establishing the Kingdom of Hawaii.

The centerpiece of the site is the luakini heiau (sacrificial temple) dedicated to the war god Ku. The stones used in this structure are believed to have been passed from over 20 miles away by a continuous chain of thousands of Hawaiian laborers, perhaps because of a belief that the stones contained special mana, or spiritual power. In its heyday this temple would have been used for the practice of human sacrifice, and its first victim is said to have been Kamehameha’s cousin and chief rival Keoua. After the construction and consecration of the temple in 1792, Kamehameha would go on to conquer or subdue all eight inhabited islands and bring them under one rule for the first time in Hawaiian history.

Even within this off-the-beaten-path site there are hidden surprises. Along the loop path that circles the park is a small inlet which is home to a sunken heiau. The Hale O Kapuni Heiau, which was above sea level centuries ago, was once used to make offerings to the shark gods. Even though the temple itself slipped from view beneath the waves several decades ago, patient visitors will still be able to spot the fins of various sharks circling the bay’s murky waters. 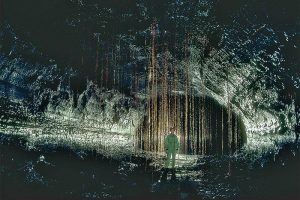 By Dave Bunnell / Under Earth Images CC, via Wikimedia Commons

Somewhere between four and six centuries ago, a large and decades-spanning eruption of lava flowed down the east face of Kilauea Volcano. In the process of flowing and cooling, the eruption formed the longest and deepest known lava tube in the world. The Kazumura Cave has been mapped to 40.7 miles long and 3614 feet deep. It is similar to other caves in look and structure, but what makes it unique is the speed of its formation. Whereas other caves were formed over millions of years by water and chemical erosion, the Kazumura Cave was formed in less than a few decades of lava flow. This rapid formation resulted in features which are unique to lava tubes, and since the Kazumura Cave receives far fewer visitors than places like Thurston Lava Tube, many of these features are still intact.

The cave affords would-be explorers the opportunity to have a quick visit or a once-in-a-lifetime adventure. Tours are available that will take small groups through miles of tunnel, down ladders and ropes to remote and difficult-to-access areas. You can visit delicate lava stalactites, sealed skylights, and frozen lava falls up to 45 feet tall. Sections of the cave can reach grand proportions of nearly 60 feet high and 70 feet wide.

As of now there is one tour operator located in the Puna district who can get you access to the cave. It is highly recommended that you seek the expertise of a guide service before trying to explore Kazumura unless you are an experienced caver.

Mo’okini Heiau and the Birthplace of Kamehameha the Great 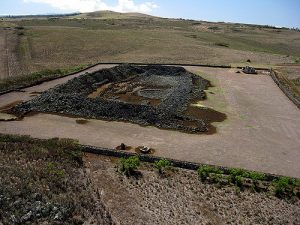 The Mo’okini Heiau is another Hawaiian temple, but it is centuries older than the Pu’ukohola Heiau. And unlike the latter, which is hidden in plain site, the Mo’okini Heiau is far off the beaten path. Access to the site requires a long drive to the sleepy northern coast of the Kohala district. Once there, you will follow a rough, single-lane road down toward the Upolu Airport. Before entering the airport you will turn left down a dirt road and drive until the road becomes too rugged to follow. If you have a 4-wheel drive vehicle, you may make it all the way to the temple. If not, you may end up having to walk several miles round-trip from where you park.

The heiau at this site was also used for human sacrifices in honor of the war god Ku, but it may have been constructed as early as the 1100’s AD. At one time it was a place of great violence and important ritual activity that involved thousands of people. Today it stands desolate and abandoned on the empty, windswept coast along the Alanuihaha Channel. The silence that surrounds the heiau is all-encompassing. Some visitors find it eerie, but it is a place of supreme beauty. On clear days you have stunning views of Maui across the channel and Kohala Mountain behind you, and the ceaseless wind whips both the waves and the grass into a continuous tumble. Best of all, you are more than likely to have it to yourself.

Just slightly past the heiau is the remains of a small house site that was the birthplace of Kamehameha the Great. The Mo’okini Heiau was dedicated to his family’s personal deity, and it is believed he would have returned to the house periodically when ceremonies were being conducted there. Eventually the ki’i (idol) of Ku was moved to the newly constructed Pu’ukohola Heiau, and Mo’okini, the house, and the place were forgotten.

Look out for more off-the-beaten path adventures in the second part of our series next month, and be sure to book a room at Holualoa Inn so you will have a relaxing place to return to after a long day of exploring the Big Island’s hidden treasures.