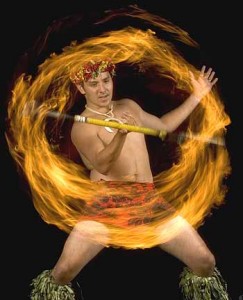 The grand finale of many Polynesian revues and luaus, the thrilling fireknife dancer astounds audiences with dazzling displays of athleticism, fire and danger. Taking his inspiration from the Samoan warrior, the fireknife dancer takes center stage at the luau, twirling, tossing, catching and throwing a flaming machete at breathtaking speeds.

Resembling a baton, the fireknife itself, called “nifo oti,” replicates an ancient Samoan weapon that features a 14-inch blade with a hook on the end. To add fire, both ends are wrapped with Kevlar or a cotton towel tied with wire, then soaked in camp kerosene (white gas), which burns cleanly and vaporizes quickly. Before the addition of fire, the traditional Samoan knife dancer portrayed the movements of the warrior at battle. The custom eventually evolved into performance art, with the dancer slicing objects in mid-air. 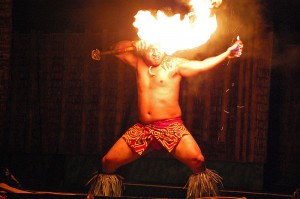 Believe it or not, the idea of adding fire happened in 1946 in San Francisco. A young Samoan named Freddie Letuili was performing a traditional knife dance at a Shriners’ convention in Golden Gate Park. While there, he observed a young girl twirling a baton with light bulbs attached at each end. He also saw a Hindu performer eating fire. Thus the idea for adding a little sizzle to his performance was born. Today, only a few brave and talented men take on the tradition of the fireknife dance, which involves truly perilous moves like eating the fire, holding the fire to your feet, or catching the fireknife behind the back. In addition to possibly getting burned, the performer is also at risk for fainting because the fire sucks up all the oxygen around him.

Here in Kona, you can see fireknife dancers at the three different luaus held at resorts in Kailua-Kona. Our Holualoa Inn ohana will assist you in recommending a host of visitor activities during your Hawai‘i Big Island vacation, including “sharing sparks” with the incredible fireknife dancers of Samoa.