Everyone has, at the very least, a general familiarity with Hawaiian culture. The flower necklaces called leis, for example, are known worldwide and might bring to mind warm welcomes in a tropical paradise of swaying palms and Pacific sunshine. Hula dancing is also a well-known practice, one which many visitors are introduced to during the dinner shows at resort luaus. Some might even be familiar with the legends of Pele, the wrathful goddess of Hawaii’s most active volcano. To those who have never visited these islands, or those who have only visited briefly, all of these things might seem to be cultural relics, vestiges of a long-lost and romanticized era in the islands’ history which has succumbed to modernity or been appropriated by commercialism. In the wake of modern development and attractions, it is easy to associate Hawaiian traditions with physical artifacts such as the ruins of the Pu’ukohola Heiau or the Honaunau Place of Refuge.

Two local cultural events on the Big Island of Hawaii in the months of April and July prove that Hawaiian culture is alive and well. The Merrie Monarch Festival in Hilo and the Parker Ranch Rodeo in Waimea showcase the living traditions of hula and paniolo culture, respectively.

The Merrie Monarch Festival is held each year in celebration of King David Kalakaua, the 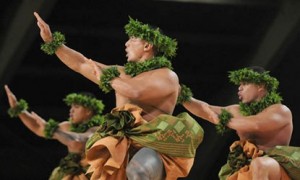 Hawaiian monarch widely esteemed for the revival of Hawaiian culture in the face of suppression by Western missionaries. King Kalakaua was a great patron of hula — which had largely been kept alive by underground practitioners since the 1820s — and originally held a large hula competition in celebration of his 50th birthday in 1886. The first festival brought hula back into the open, and the practice soon spread from the islands to countries around the world. 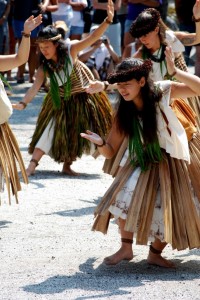 edging out first runner-up Juleyn Machiko Kaloke Kaluna in a double tiebreaker. The festival celebrates hula as a living art, one which maintains connections to its history (kahiko) while continuing to evolve (‘auana). The festival takes place outside the peak season for tourism, thus escaping the attention of many visitors, but it is still a major attraction that draws spectators from around the world. Anyone interested in attending should plan on purchasing tickets and booking accommodation well in advance. Tickets are available by mailed-in, written request beginning December 1st, 2017.

2. The upcoming Parker Ranch Rodeo, to be held on the 4th of July, celebrates a tradition whose existence might come as a surprise to those not familiar with the history of the Big Island. King Kamehameha III originally invited Spanish-speaking ranchers to the island in the 1850s to train locals how manage cattle. The Hawaiian pronunciation of español — paniolo — became the local name for these cowboys and the traditions they brought with them. Cattle ranching quickly grew into one of the largest and most sustainable industries in the islands, and paniolo traditions became enmeshed in the culture of the Big Island. The industry still plays a vital economic role here today, and there are areas where cowboy boots and country music are more common than flip flops and board shorts. One such area is the town of Waimea, home of the Parker Ranch. Parker Ranch is the first and oldest ranch in Hawaii, and each July 4th they host a rodeo to celebrate paniolo culture. Competitors from all over the island engage in horse-racing and roping events with a level of expertise that comes from a lifetime of practice. Tickets for this year’s rodeo go on sale at the Parker Ranch Store in Waimea on June 1st, 2017. Gates open on rodeo day at 9:00 a.m., but seats are first come, first served so it is best to get there early.

Both of these festivals offer an opportunity for visitors to the Big Island to learn about local culture and enjoy truly impressive displays of artistic and athletic talent. If you are visiting this summer, consider making the Parker Ranch Rodeo part of your trip for some off the beaten-path entertainment. If you are interested in coming for next year’s Merrie Monarch festival, it would be best to start making arrangements now.

Plan your stay and unwind in one of our romantic suites or add on one of our luxurious packages to make the most of your time on the Big Island. See you soon!