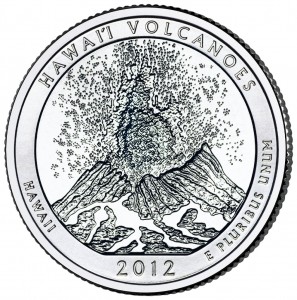 New money will be rolling into Hawai‘i in the form of a newly minted U.S. quarter that commemorates Kilauea Volcano. The next installment of the United State Mint’s “America the Beautiful Quarters Program,” the coin showcases an engraved depiction of an eruption of Kilauea Volcano.

Designed by sculptor-engraver Charles L. Vickers, the Hawai‘i Volcanoes quarter is the 14th in a series of 56 America the Beautiful Quarters and is the fourth quarter in the series to be released this year. To celebrate the unveiling, Hawai‘i Volcanoes National Park will host an official event on Wednesday, August 29 from 1:30 p.m. to 3 p.m. at the park’s Kahua Hula, located south of Kilauea Visitor Center on Crater Rime Drive. Visitors can exchange cash for $10 rolls of the highly collectible quarter.

This is not the first time that Hawai‘i has been featured on a U.S. quarter. In 2008, the Hawai‘i State Quarter was released as the 50th coin in the State Quarter series. The reverse of the coin was designed and engraved by artist Don Everhart, who created an image of King Kamehameha I overlooking the Hawaiian Islands. The coin also includes the state motto, “UA MAU KE EA O KA ‘AINA I KA PONO,” which means “The life of the land is perpetuated in righteousness.” More than 500 million Hawai‘i state quarters are in circulation.